Though our nation has strayed from its American ideals, home has always been here for us.

Home is goodness. Home is safety. Home is freedom.

It applies to all levels of government. At the federal level, it means a government that:

And Franklin, more than anyone, was the first poster child for the original American Dream, in which all people can live better, fuller, and richer lives through equality, freedom, justice, opportunity, and effort. Franklin came from a poor family and limited formal schooling to become a successful businessman and author through ability, self-improvement, and diligence. He retired as a printer at age 42.

Outward, he performed many acts of goodness for the public good. He founded libraries, fire departments, militias, hospitals, public schools, and sanitation projects. He invented lightning rods, bifocal eyeglasses, matching grants, and better wood-burning stoves. He was a first-rate scientist, exploring and furthering the world’s understanding of electricity, ocean currents, climate, and population growth. He was an outstanding diplomat and philosopher that made the United States a reality.

No person is perfect, which is why no person should be put on a pedestal. Through goodness in character, Franklin was often open-minded to see his wrongs, improve himself and his views, and change for the better. His views of slavery evolved from owning slaves to becoming an outspoken president of the Pennsylvania Society for Promoting the Abolition of Slavery. On behalf of the Society, he presented a formal abolition petition to Congress in February 1790.

The Goodness Party believes it is worth looking at Franklin’s goodness in thoughts, actions, and spirit for inspiration and guidance.

Only goodness leads to greatness.

We will not achieve our American ideals until we embrace and act with goodness — as individuals, as a people, and as a nation.

A better US, a better world.

When we — all of us and the United States — do goodness, the world is a better place for all of God’s creatures.

With limited time to field candidates, our goals for the rest of 2020 are to:

Show your support for the Goodness Party and spread awareness the following ways.

Spread awareness and goodness by sharing our messages whenever and wherever you can. Send links or forward Goodness Party messages and images.

Do goodness to yourself and others every day.

Display Goodness (on your sleeve or elsewhere)

Wear the Official Goodness Party apparel. Profits from your purchase of these items provide funds to help the Goodness Party create, distribute, support, and expand its message.

Multiple apparel, multiple sizes, multiple colors, and Men / Women / Youth cuts are available. Shirts are made and distributed through Amazon.

Two designs are currently available. Both display the Goodness Party logo in the front. The back is blank for one design, and the other design displays the Where We Stand graphic to provide an additional conversation starter. Examples below. 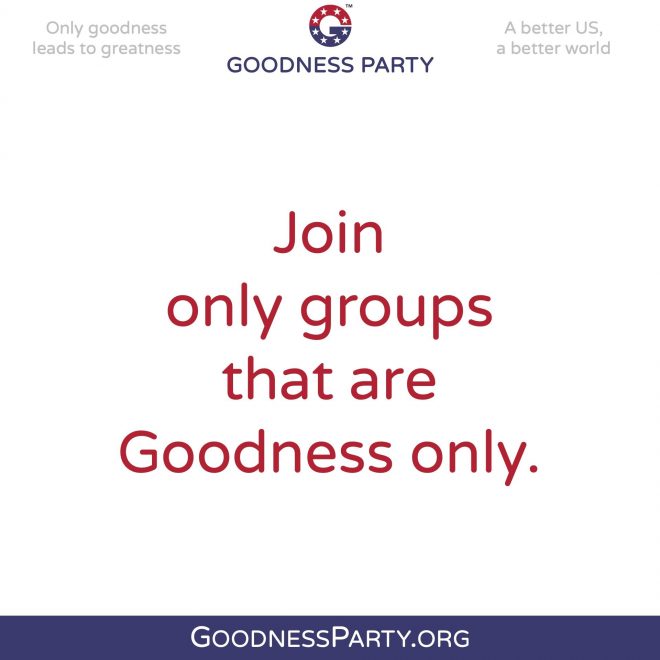 As social beings it is human nature to join groups. The groups you join affect your beliefs and your psyche … END_OF_DOCUMENT_TOKEN_TO_BE_REPLACED 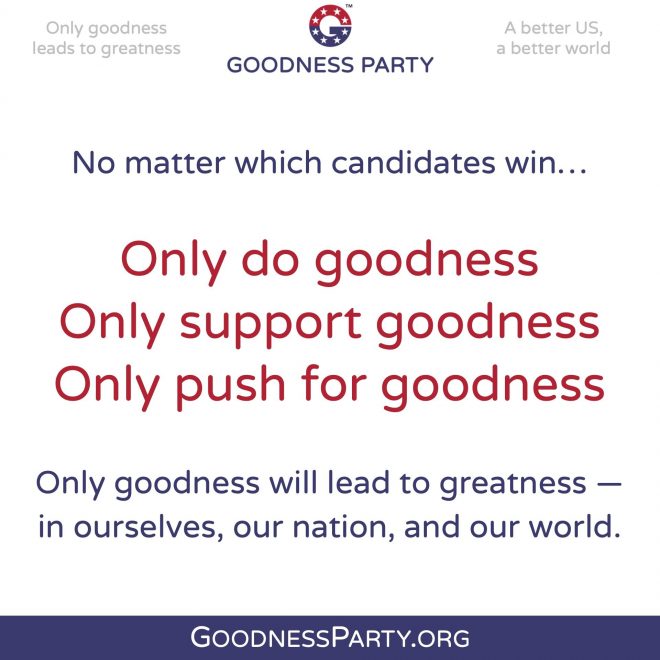 The ideology for the Goodness Party is “Goodness in government, always.” No matter who won the elections, every government official, … END_OF_DOCUMENT_TOKEN_TO_BE_REPLACED 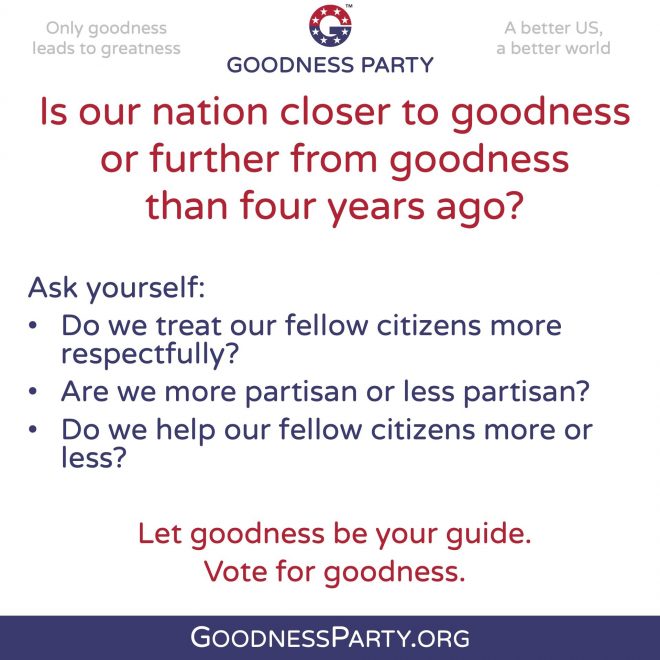 The Goodness Party’s ideology is “Goodness in government, always.” Only goodness can lead to greatness. When voting for candidates this … END_OF_DOCUMENT_TOKEN_TO_BE_REPLACED 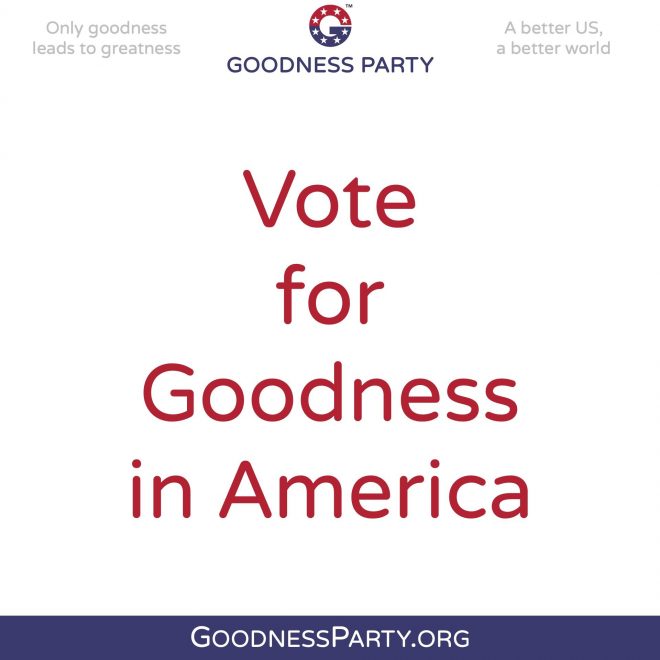 Goodness in character has traditionally been a hallmark in voting for candidates, and as important as policy. If a person … END_OF_DOCUMENT_TOKEN_TO_BE_REPLACED

Our nation has become increasingly divided and partisan. A survey published in September 2020 by More in Common noted in … END_OF_DOCUMENT_TOKEN_TO_BE_REPLACED 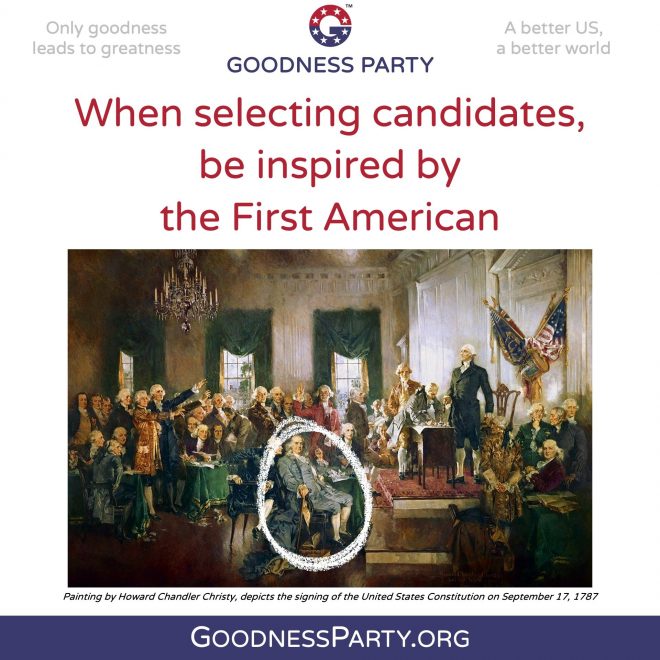 The Goodness Party is inspired by the thoughts, actions, and spirit of goodness exemplified in our first American: Benjamin Franklin. … END_OF_DOCUMENT_TOKEN_TO_BE_REPLACED