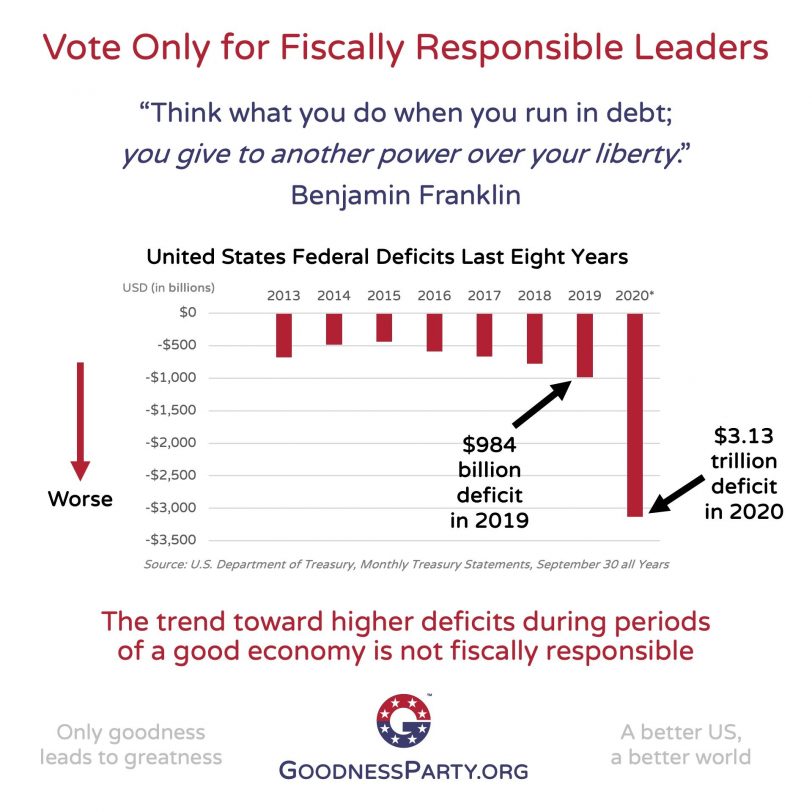 Deficits can be necessary in times of crises where government intervention is the best or only way to right the ship or address threats. It can be beneficial in kick-starting changes and economic growth, but it must be done prudently with the eye on payback in increased revenue to cover these costs.

Unfortunately, deficits are increasing in our country even when economic activity is doing well. Excluding the impact of the pandemic in 2020 which ballooned this year’s deficit, deficits have increased year-over-year since 2016, even though the economy has been on a steady upward trajectory since the Great Recession of 2009. The first six months of FY2020 before the pandemic impact was already showing an increase in the deficit of 8% over the previous year’s rate.

Some people prefer to look at the deficit relative to Gross Domestic Product (GDP). This year’s $3.1 trillion deficit amounts to 15.2% of GDP, the greatest deficit as a share of the economy since 1945. As additional comparison, the percentage at the height of the Great Recession of 2009 which included the debt crisis and recession was 9.8% in 2009. After dropping to 2.4% in 2015, the percentage of the deficit to the GDP increased every year since.

Deficits add to the overall debt of our nation. It should be a concern for all citizens. Sadly, the concern appears to be waning. A Pew Research survey conducted June 16-22, 2020, showed “just under half of U.S. adults (47%) called the deficit ‘a very big problem’ in the country today—down from 55% in the fall of 2018.”

The Brookings Institution noted in July 2020 the U.S. government spends as much on interest on the debt as the combined budgets of Commerce, Education, Energy, DHS, HUD, Interior, Justice & State.

And as Franklin said, when we have debts to others, others have power over our liberty.

Vote only for candidates who are fiscally responsible.