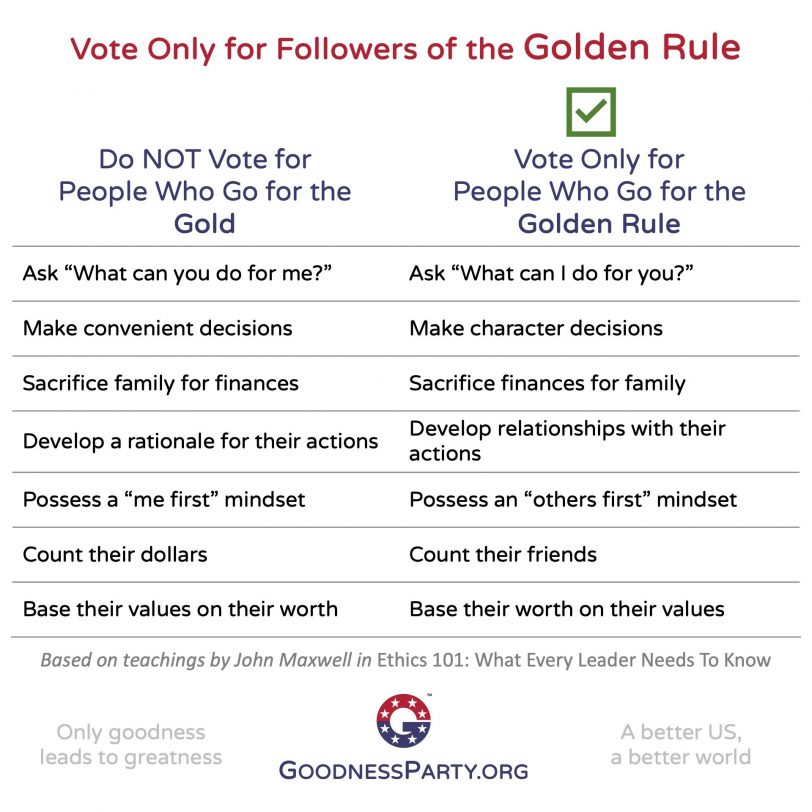 John Maxwell, in his book Ethics 101: What Every Leader Needs to Know, states “There’s a world of difference between people who go for the gold and those who go for the Golden Rule.” He presents the table in the image to highlight some of the differences.

People who go for the gold love money. And when mixed with power, it is a cocktail for disaster. As Benjamin Franklin wrote: “There are two passions which have a powerful influence in the affairs of men. These are ambition and avarice; the love of power, and the love of money. Separately each of these has great force in prompting men to action. But when united in view of the same object, they have in many minds the most violent effect.” See Franklin’s call to action for us.

The takeaway wisdom for us: Only vote for candidates who follow the golden rule and are not enamored with money.

Do NOT Vote for People Who Go for the Gold
Ask “What can you do for me?”
Make convenient decisions
Sacrifice family for finances
Develop a rationale for their actions
Possess a “me first” mindset
Count their dollars
Base their values on their worth

Vote Only for People Who Go for the Golden Rule
Ask “What can I do for you?”
Make character decisions
Sacrifice finances for family
Develop relationships with their actions
Possess an “others first” mindset
Count their friends
Base their worth on their values

Based on teachings by John Maxwell in Ethics 101: What Every Leader Needs To Know