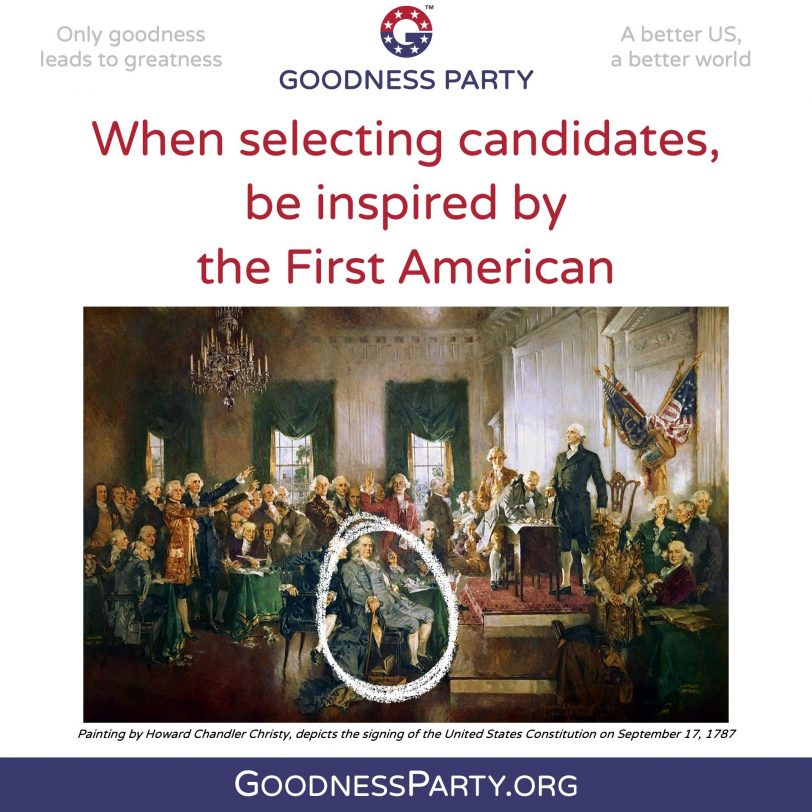 Inward, Franklin asked himself each morning “What good shall I do this day?” and concluded his evening with “What good have I done today?” He identified thirteen virtues and tried to make them habits.

Outward, he performed many acts of goodness for the public good. He founded libraries, fire departments, militias, hospitals, public schools, and sanitation projects. He invented lightning rods, bifocal eyeglasses, matching grants, and better wood-burning stoves. He was a first-rate scientist, exploring and furthering the world’s understanding of electricity, ocean currents, climate, and population growth. Franklin was a philosopher, and he was an outstanding diplomat that made the United States a reality.

Franklin has given US (as citizens and as the United States) words of wisdom and calls to action this election season. Consider these as you examine candidates. Vote only for candidates that have aligned with goodness and Franklin’s wisdom. Look at the prior posts for the Goodness Party to get more detail. Below are the wisdom and call to action recaps from 33 posts of American wisdom from Benjamin Franklin.

Franklin’s wisdom for US

Our freedom in the United States of America depends on our goodness as individuals, as a people, and as a nation. Never take our freedom for granted.

Do goodness every day.

Goodness of government and of its leaders are critical for the happiness of its citizens.

Recognize the strong connection between godliness and doing goodness for all.

Beware of mixing both power and money in the same position.

Virtue is necessary for happiness.

Many laws are enacted for personal gain rather than public good.

Always remember that government officials in democracies perform duties for the public and serve its constituents.

God judges us on the goodness in our actions to others.

How we are looked at externally is a guide for how we are doing as a country.

A democracy requires the ability of its citizens to call out the corruption, mishandlings, wrongs, ethical lapses, and illegalities of its leaders.

Providing a good education is critical to a happy public and long-lasting nation.

The wrong type of help can sustain poverty.

Slavery and human trafficking is against American ideals.

Beware of hypocrites under the religious banner.

Do not favor the rich over the common person.

Transparency of actions is only avoided by the guilty.

Good government and people along with a healthy environment make a desirous nation.

No one should be exempt from paying their share of taxes.

Doing good is a responsibility we have to others.

Despotism is good for no one.

Doing good to others is the most desired praise to God.

Honor is lost when a mistake, once known, is not corrected.

Doing good is good for you.

Virtue is best obtained by learning it in youth.

The bashing of other political parties is nothing new—though it is distasteful, not always true, and not from a place of goodness.

Debt gives others power over you.

Goodness is a prerequisite for greatness.

Do good to others for the goodness you have received.

Virtue and liberty are more valuable than wealth and power.

Do only actions you would not be ashamed of if known by others.

Franklin’s call to action for US

Strengthen our virtues, fight corruption, and eliminate hatred so that freedom rings for all.

Do goodness every day.

Elect leaders of integrity and wisdom. Instill goodness in government.

Do good deeds for the public good.

Do not elect officials who have both a love for power and money.

Do not elect people who think they are above the people or who do not serve all citizens. Remind officials they are public servants.

Do all the goodness we can, in all the ways we can, for all the people we can.

Ensure we are always be the country of choice for everyone in the world.

Support a free press, freedom of speech, and whistleblowers that call out injustice, illegal activities, unethical behavior, negligence, and corruption in our government officials.

Ensure public education is properly funded, of high quality, and available to all citizens.

Implement policies and programs that empower citizens to raise themselves out of poverty.

End slavery and human trafficking of all forms.

Ensure laws do not favor the wealthy in any form or fashion, whether citizens or migrants.

Push for transparency throughout all levels of government. Ensure there is a free press to review the actions of our government and our elected officials.

Push for a people and government of goodness. Protect and improve our environment.

Eliminate tax loopholes to ensure we all pay our share. Collect from those who are behind in paying their share.

Ensure our country stays free, and that no citizens of the United States are treated oppressively.

Elect officials who are humble enough to admit mistakes and correct their errors.

Be a nation of goodness. It’s good for all of us.

Teach our youth to do goodness to others. Only elect officials who are wise and good men and women.

Create a discourse of goodness in all political discussions. Minimize foreign influence on increasing rancor and hatred in politics.

Improve our government’s goodness and our virtues so that we can maintain and strengthen our liberties.

Do goodness in everything you do.

Stay focused on doing goodness in our nation.

Do goodness to others, always.

Ensure we are a nation of virtue and liberty. Do not elect officials who seek wealth and power at our nation’s expense.

Only elect officials who are just, honorable, and transparent in their actions. Ensure transparency in decisions and actions of government.