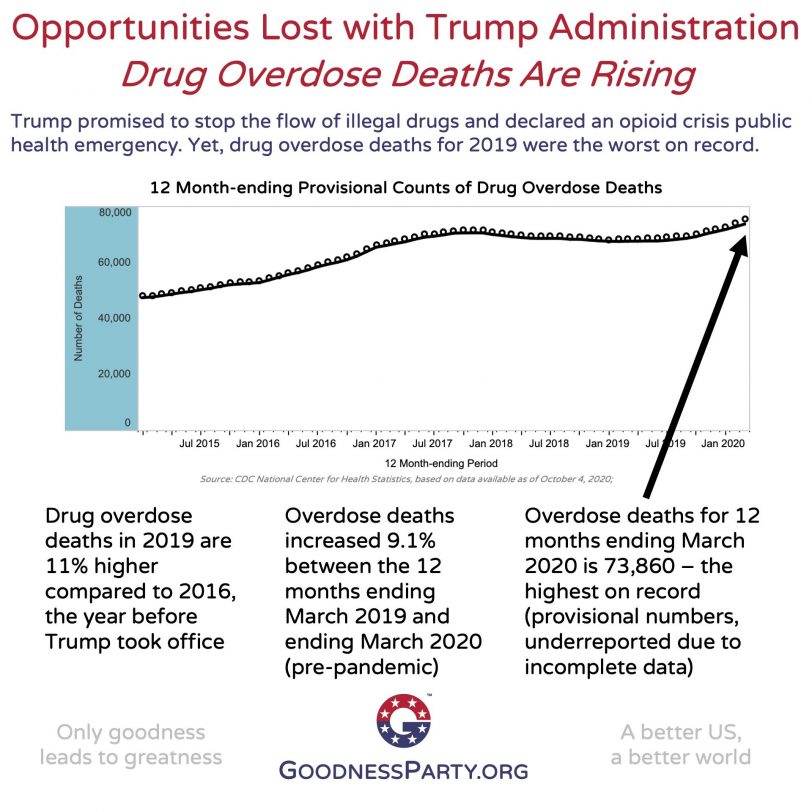 Donald Trump campaigned in 2016 on reducing the flow of illegal drugs into the United States, particularly from Mexico. In October 2017, President Trump declared the opioid crisis a public health emergency. The Whitehouse official website notes, “Ever since, the Trump Administration has applied an all-of-Government approach to the epidemic” and calls out the nearly 64,000 drug overdose deaths in 2016.

Unfortunately, the Trump administration has been ineffective in addressing the crisis. It is now worsening.

Drug overdose deaths in 2019 are 11% higher compared to 2016, the year before Trump took office and the year the administration wanted to be compared against. Overdose deaths increased 9.1% between the 12 months ending March 2019 and the 12 months ending March 2020, a significant rise a year after Trump’s national call to action. This period was pre-pandemic.

The current provisional numbers show drug overdose deaths for the 12 months ending March 2020 at 73,860 — the highest on record. These are provisional because states underreport until they have evidence to confirm the death was due to a drug overdose.

Illegal drugs and substance abuse have economic and societal costs for all Americans. According to the Justice Department, drug law violations make up a substantial proportion of incarcerations in local, state, and federal facilities and represent the most common arrest category. It causes physical and emotional damage to the user. It negatively impacts a user’s family, coworkers, and many others with whom they have contact. There are also productivity and the environmental impacts.

The economic cost to our nation for opioid overdose, abuse, and dependency alone is staggering. One government study published in 2016 estimated the total economic burden to be $78.5 billion. Over one third of this amount is due to increased health care and substance abuse treatment costs ($28.9 billion). Approximately one quarter of the cost is borne by the public sector in health care, substance abuse treatment, and criminal justice costs.

The Trump administration lost an opportunity to tackle this problem in our nation. It has only gotten worse.