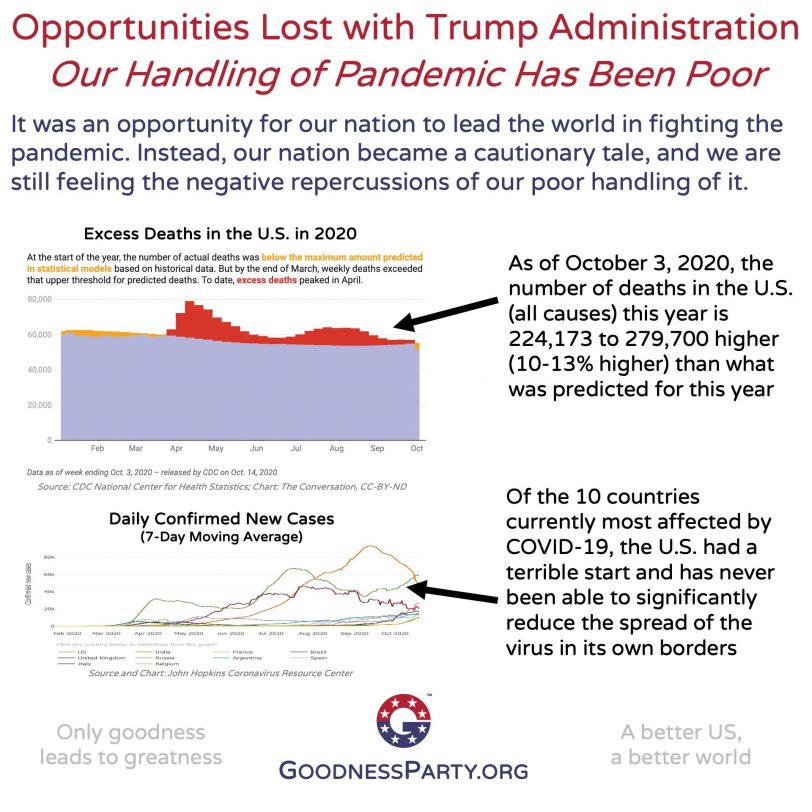 The United States of America has been the most powerful nation in the world since World War II. Other than our size and military capabilities, our nation has been the leader in scientific research, technologies, education, and innovation. Other countries have turned to us for guidance in growth and in crises.

It was expected that the United States would be in its natural position to lead the world through this world-wide crisis.

Unfortunately, this opportunity was lost. We mishandled COVID-19 and are still in the midst of it and feeling the repercussions. As a result, countries have looked elsewhere for guidance.

As of October 3, 2020, our nation has witnessed between 224,173 (the most conservative estimate) and 279,700 excess deaths in the first nine months of this year compared to projections based on actual historical patterns.

Whether from COVID-19 or other causes, the number of excess deaths in the United States is staggering. It is 10-13% above expected deaths.

A study by researchers at Harvard and the University of Pennsylvania compared rates of death from any cause for 14 countries through July 25 (the data available). The finding: Since May 10, the U.S. has had the highest all-cause death rate of all high-mortality countries.

The virus negatively affects our economy, the education of our youth, our culture, and our health. Handling the spread of the virus is critical in minimizing the negative impacts. Countries need to “flatten the curve.”

Sadly, our nation has not been able to significantly reduce the spread of the virus within our borders. As of mid-October 2020, new cases confirmed each day in the U.S. are again on the rise, and the total number of new cases have again been the highest in the U.S. compared to all other countries.

The Trump administration had an opportunity to lead the world in managing this crisis. Instead, it has our nation leading in deaths and cases, not in leadership and solutions.